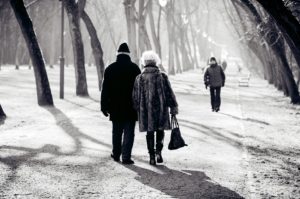 The winter weather can make navigating driveways, sidewalks, streets, and parking lots a treacherous task. Every year, thousands of Canadians will injure themselves after slipping on an icy patch. In Ontario, 20,000 people will end up in the Emergency Room each year as a result of falling on ice. Injuries from ice related slip and falls can be minor, cuts and bruises, to more serious broken bones, concussions, or even death.
Geoff Fernie, the research director at the Toronto Rehabilitation Institute, wants to help reduce the number of slip and fall injuries that occur during the harsh Canadian winter. Fernie has developed a system of testing winter boots for their traction on ice and snow. It’s called ‘Rate My Treads’ and it has evaluated both work and casual boots.
Rate My Treads devised a method called the Maximum Achievable Angle Test, or MAA. The MAA works by having a test subject walk across a level surface made entirely of ice. Gradually, the incline of the surface is increased until the subject can no longer walk without slipping. The angle before they slip is called the Maximum Achievable Angle. The boots are then assigned a rating (1-3 snowflakes) based on what angle it reached. A minimum rating of an angle of 7 degrees was picked for the MAA test, because that would meet accessibility guidelines in Ontario for a curb ramp. If the boot gets a score of 11-14 degrees it will receive 2 snowflakes, and if it has a score of 15 or above it will receive 3 snowflakes.
So far, Rate My Treads has evaluated about 100 winter boots, and most of them failed to meet the standards set for the study. Only 9 boots received a grade of 1 snowflake.
Fernie says that contrary to popular perception, when it comes to stability, the tread on a boot isn’t as important as the material used on it. There are two types of soles that Rate My Treads found to be most effective traversing ice and snow. One is a sole that has “carbide rough bits” embedded into it, giving it a sandpaper like quality that works by scratch the ice. The other kind was described by Fernie as a “felty kind of Arctic grip stuff which is lots of fibres…a bit like some animal paws.”
The researchers hope to expand testing of the boots to include the testing of new materials for soles, working with manufacturers to develop a better product, as well as rating boots for durability.
If you’re interested to see how your boots measure up, check out the full list of boots evaluated by Rate My Treads. You can also listen to this segment from CBC Radio’s The Current, in which Geoff Kernie describes his project and its results.

If you have suffered an injury as a result of a slip and fall, contact one of our personal injury lawyers for a free initial consultation as soon as possible as there are often short deadlines that can apply to a claim.