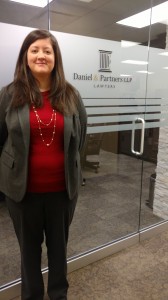 Prior to attending law school, I completed my undergraduate studies at Brock University, receiving an Honours Bachelor of Arts degree in History, with a minor in Political Science. I was named to the Deans List in 2006, 2008, and 2009.

I previously worked at Daniel & Partners LLP in 2014 as a summer student. I am back now as an NCA Candidate, working towards earning my Certificate of Qualification that will enable me to complete my articles and be called to the bar in Ontario.

Outside of work, I enjoy staying active with rugby, playing board games with my family, and volunteering.

Related Posts
Welcome Back Brianna!
Brianna has just completed her fourth year in a combined six-year political science and Juris…
October is Free Wills Month!
Sarah J. Draper and Lauren M. Angle of our Wills and Estates law group are participating in…
Lauren Angle receives Top 40 Under 40 Award
The Partners at Daniel & Partners LLP wish to extend a big congratulations to their…