Congratulations to Team Niagara for an impressive showing at the 2015 Intel International Science and Engineering Fair in Pittsburgh, Pennsylvania and the 2015 Canadian Wide Science Fair in Fredericton, New Brunswick.

Grimsby Secondary School student Benjamin Friesen took home the Oracle Academy Award at the International Fair for his project, “Improving Crypto: A Novel Smartphone Based Entropy Generator”, and Team Niagara is bringing home four bronze medals from the Canada Wide Fair: Bethany Poltl for her project “Jitter Bug: How HFCS Affects the Longevity, Fertility & Behaviour of Drosophila”, Lucas Penny for his project “Rhomboid Protease 4 mRNA Expression In A Mouse Model of Alzheimer’s Disease”, Holly Philbrick for her project “Clarifying the Function of Vitamin E”, and Nicholaas Doyle for his project “Experiments in Collective Robotics”.

To qualify for the International and Canadian Wide Fair, students have to excel at the Niagara Regional Science and Engineering Fair.

Sarah J. Draper has been a judge of the NRSEF for the past 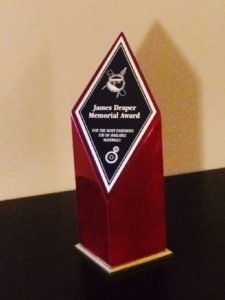 For more information on how you can enter the NRSEF, get involved in judging, or donate to help Team Niagara attend the 2016 Canada Wide fair in Montreal, Quebec, please click here.